Yesterday I attended Oslo Lux, a one-day conference at the Oslo School of Architecture and Design on the intersections between light, space, technology and art. In a way it is a really marginal event as it emphasizes the role of light, and it does so for the second time (first event took place in 2011). I wasn’t quite sure whether I could justify spending a whole day at an event about light, considering it isn’t a topic that touches my work in any direct way, but the line-up of speakers and media artists represented made curiosity win over. I’m glad I went. It is always inspiring to go to events that at first sight have nothing to do with your own work. More often than not such events turn out to be much more related than initially thought. At the very least, they generate new ideas, which is really all we want as researchers. Here are my notes on the first speaker of the day, along with a challenge: Visit more seemingly unrelated events and see what happens. 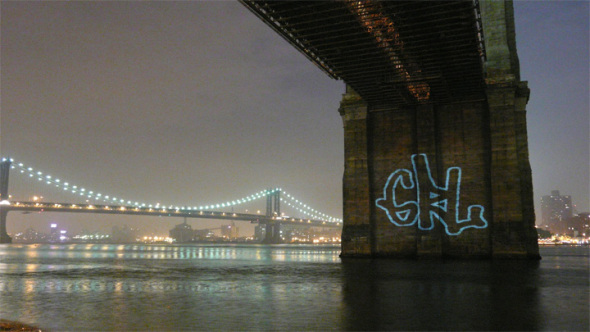 First speaker Evan Roth gave an energizing talk about the influence of the open source development model when creating public space art projects. Providing a great overview of his artistic career so far, Evan made sure to relate every piece he talked about to the hacker philosophy underlying his artistic practice. He started off by conceptualizing the notion of “hack” and how it relates to open source. Hack, Evan suggested, should be understood as a general philosophy or way of being that isn’t necessarily about computer code. Hacking is about exposing or adding functionality to a device that it wasn’t originally designed for. It is the cultural and social aspect of hacking that seems to interest Evan more than the code or tech itself. The question is what the hack may help expose about the system it is altering?

I first came across Evan Roth’s work in 2006, through the work he did on Graffiti Research Lab – a project “dedicated to outfitting graffiti – and street-artists with open source technologies for urban communication”. Having researched graffiti culture in Malmö, Sweden, hanging out with the local artists as part of my undergraduate art history thesis, I came pretty close to writing my MA thesis about the intersections between new media and graffiti using Evan’s work as my case study. Thus, I was particularly excited to hear Evan’s thoughts on graffiti as a cultural hack.

It is not the letters that matter as much, as the system it is hacking. The interesting thing about graffiti in Evan’s terms, is the ways in which it takes advantage of a pre-existing system and power relations, exploiting its weaknesses.

Evan Roth’s fascination for graffiti has translated into many of his art projects, starting with his grad project Graffiti Analysis developed at Parsons in 2004. Graffiti Analysis is a study into the motion of graffiti, using custom made software for visualizing the unseen motion involved in the creation of a tag. As Evan pointed out, graffiti usually relies on film and photography to document the pieces. But photography books and films about graffiti are most often about the letters, the tags themselves or the subculture involved. Part of his motivation for doing Graffiti Analysis and related projects like Laser Tag, was for people to see it as a performance, showing off the gestural movements and speed that is involved in the making of this art form.

In many ways what unites much of Evan’s art practice is a critical exploration of what he calls “creative disrespect” in public spaces. It is not about disrespect in a rude way, but in the open source and hacker fun way – of “playful cleverness” – another illuminating term that came up in his talk. One of the pieces I enjoyed in terms of playful cleverness was his airport security hack called T.S.A Communication, a project that alters the airport security experience by placing sheets of stainless steel into carry on luggage that will display messages aimed at airport security while going through the x-ray screening process.

Situating his working ethos in Linus Torvald’s notion of “lazy like a fox”, Evan made a point about being pragmatic about processes of making art. Rather than trying to make complicated things, the question he asks is what the smallest amount of effort is with which a statement can be made? In this playful mode, the projects he does as part of the F.A.T Lab are illustrating of the combination between the hacker philosophy and Torvald’s “lazy like a fox” ethos. For example the How to keep motherfu%#s from putting their seats back, a super simple hack on preventing the people in the seat in front of you from putting their seats back. Who hasn’t wished they could do that?

This philosophical merger also translates into more political and urban projects, in terms of empowering people to communicate in public spaces by means of open source technologies. Keeping with the theme of the conference day, Evan pointed out how light in the city often is in the hand of bureaucrats and advertisers to decide. But how do people really communicate in cities? What is the simplest way in which people can communicate with light? For instance by equipping lots of people with LED throwies in order to decorate trams that run through the city.

Empowering people is not just about empowering the collective, as one of my favourite projects by Evan attests to. Eyewriter is an ongoing project that empowers people who are suffering from ALS with creative technologies. It is a low-cost eye-tracking apparatus and custom software that allows graffiti writers and artists with paralysis resulting from Amyotrophic lateral sclerosis to draw using only their eyes. Please do check out the video documenting his amazing project!