The amount of location based social network services are steadily growing. In line with the increasing adoption of smart phones, the Web has becomes more and more mobile. From the early days Dodgeball, Plazes, Loopt, Brightkite, Whrrl, Google Latitude to the new and popular kids on the block, Foursquare and Gowalla, location based social networking is about broadcasting your physical whereabouts to friends and followers online. Some of these services ask you to “check-in” at different venues such as restaurants and bars, or they simply function as a status update tool for places, much in the same sense as Twitter. The whole idea of location based social networking is founded on the notion that people want to find their friends in their real physical locations, as in who is where? The value of these services is also based on finding location specific information, through recommendation and tips for restaurants and other sites of interest. Basically, instead of asking what you are doing at the moment, location-based services ask where you’re at. Just how useful and meaningful these existing services really are to users is certainly up for debate. 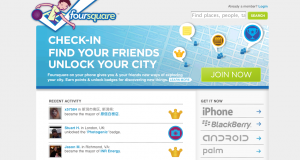 Great check-in battle So far Foursquare seems to be slightly ahead in the running to become the Twitter of the check-in world, but still the service has to knock off the other strong competitors such as Gowalla. As Wired UK puts it in the latest July edition, there is a great check-in battle going on at the moment.

Some of the first location-based services in this genre that I came across included Dodgeball, Plazes, Brightkite and Loopt. Dodgeball, possibly the first of the bunch, was founded in 2000 by Dennis Crowley and Alex Rainert and later bought by Google in 2005. Although Dodgeball didn’t survive, Dennis Crowley went on and founded Foursquare and Google replaced Dodgeball with Google Latitude. Today, Foursquare and Gowalla, both founded in 2008 and launched at the 2009 SXSW, count as some of the most popular location-based media. Foursquare just passed the 2 million users mark and surely triumphs Gowalla’s around 340,000 users. Although other services like Loopt with its 4 million users and Brightkite with its over 2 million users count more users than Foursquare, the growth rate of the latter is overwhelming with a 75 per cent every day. Gowalla on the other hand won the Mobile category 2010 in SXSW Interactive awards. 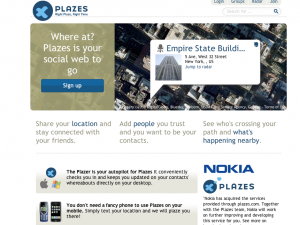 I guess it is safe to say that the time has come for location-based social networking to eventually hit mainstream. It seems the earlier services were just too early at it. In February 2008 I signed up for the now Nokia acquired Plazes. Then, as now, merely writing a status update broadcasting your location seemed pointless. Plazes is modelled around the question “Where at?” encouraging users to “plaze youself”. Simply stating “I’m at the University of Oslo” as Plazes and other early days services of this sort asks you to update, reminds a lot of how Twitter in the beginning was used to broadcast status updates of what you had for breakfast that morning. This is not to say that the microblogging format in the locative genre may eventually enjoy the same kind of success that Twitter did. While the concept of sharing real-time status updates worked for Twitter, the concept so far proves too limiting for location sharing. The early days sites that still are in the running for being the location app of choice have extended their functionalities beyond that of the sharing geo-coordinates, offering check-ins (Brightkite, Loopt), picture sharing (Brightkite) and loyalty points/rewards (Loopt). Bottom line is that it wasn’t until the concept of the check-in arrived that location-based social networking became more interesting to people. The coupling of location-based social networks with game mechanics through the check-in functionality and rewards systems associated with check-ins, clearly started to change things. Both Foursquare and Gowalla are more or less structured around “checking in” at different venues, offering rewards and badges for doing so.

And indeed, checking in at places makes more sense than just announcing your physical location through a status update. Personally I have mainly used Foursquare, particularly while in New York, and found it useful for checking out restaurants and bars. Of course one doesn’t need to check in at the different venues in order to read other peoples’ tips and recommendations but somehow I did anyway. For me it became a way of keeping track of all the places I had gone to, sort of a personal history, which I deliberately didn’t share it with anyone.

Will it ever hit mainstream? But eventually people will get tired of checking in just for the fun of it, just for showing off their exiting personal histories or for getting badges. The real utility is still out there to be found and further developed. Here in Oslo, checking in at different places is still a very marginal activity. I guess it is all about adoption in the end. So far, only 7% of the Americans are aware of location-based social networks. How the numbers look here in Norway I don’t know but that it is closer to light-years form a mainstream is probably safe to say. Enough people would have to be willing to share tips and recommendations about places they have been too and businesses would have to start rewarding their loyal checker-ins with special deals for the game to shift from curiosity to utility. In the US this is slowly staring to happen where more and more businesses offer special promotions and loyalty rewards but there is still a long way to go, not least because of the technology itself.

One of the biggest obstacles is as trivial as battery life time. Another one is access to data, which of course is a huge privacy issue. In this regard Loopt is an interesting case in point as it stared out with constantly tracking peoples’ location automatically by running in the background all the time (needless to say that this was deemed highly problematic in terms of privacy). It then changed it’s strategy to check-ins abandoning the background location-updating, only to shift slightly back towards background location again with its latest version.

Conceptual challenges But most importantly I think are the conceptual obstacles that need to be thought through more thoroughly. The question shouldn’t be so much about optimizing the existing model of check-ins or getting more businesses to reward their loyal customers (although this certainly is important too) but one about conceptualizing the locative and the social. Many of the location-based social network services should get a better sense of what location means or should mean in terms of connectivity and sociality. Not just in general but develop a service-specific conceptualization of the parameters location, social, friends and mobility in order to built a meaningful and useful site service for the users. Take Foursquare for instance, in its two minute video intro to the service it mentions at least four different things that seem to be key to the service. For one, Foursquare declares it is a service that let’s you become more aware of your world. It let’s you discover where your friends are. Foursquare wants you to tell your friends where you are. It let’s you check out tips and recommendations. “The more you use it the more you will get out of it”. Then there are the game mechanics with badges and points for checking in. Also, you are told to try to check in at a place more than anyone else in order to become the “mayor” of that place. “You don’t get a key to the city, but you might get rewards from certain businesses just for being a loyal customer”. This is all well and good, but there are just too many half-hearted assumptions about what constitutes a location or place and how people want to connect to these locations in a meaningful way. Do people first and foremost want to find each other, and if yes who do they specifically want to find? Surely not all “friends” are equally desirable to find. Do people want to be found? And if yes, when and where and by whom? I am sure there have to be distinctions drawn here. Especially in terms of being located as a “friend” or as “data” or “commodity” by companies and businesses.