These days Facebook has launched a new feature called Facebook Questions. Basically it lets you ask and answer questions from your extended circle. But Facebook is not the only one experimenting with the potentials of the Q&A communicative and informational form. Yesterday I signed up for a service called Replyz that integrates with Twitter on leveraging the amount of questions asked on the popular microblogging platform by mining all tweets that seem question-related. The service also lets people ask questions or give answers beyond their Twitter network. At the moment Replyz is in a semi-private beta trying to figure out how to make the most out of what appears to be the latest trend in social network features – questions.

Facebook even seems to consider questions to be an important part of the company’s future. Beta testers of the Facebook questions feature have been asked to “ask great questions and provide great answers about their favourite topics. Economics? Skydiving? Relationships? Mexican Restaurants? Now it’s “What do you want to know?” and “What’s your question?” instead of “What’s on your mind?” and “What’s happening?”

I’ve tried both Facebook and Twitter’s questions feature. While the questions feature is not directly promoted through the Twitter website, any questions posed via Replyz (provided you have logged on via your Twitter account) gets automatically posted on Twitter. Facebook on the other hand has integrated its questions features as part of the toolbar on the left and promotes it as a preview right above the news feed these days. However, both social network sites still have a long way to go before the questions feature seems to be useful. Right now it all comes across as rather confusing and messy. In the case of Facebook I can’t seem to access the question I posed yesterday. It merely states that I have participated in asking a question but the question itself and potential replies have disappeared out of sight. The questions feed consists pretty much of the question “What is the best restaurant in Cambridge?” repeated 13 times along with different answers. There are two other random questions in the feed right now and all three questions have been posed by a friend of a friend. Unfortunately I am not overly interested in restaurants in Cambridge at the moment. 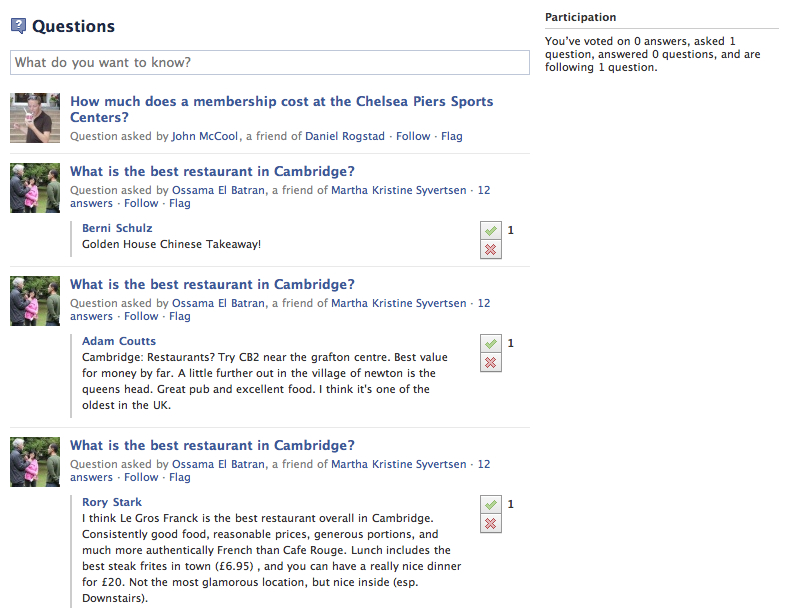 Likewise, my question posed in Replyz hasn’t received any replies yet, although the service boosts with the promise of getting replies in real-time. Now I can’t see how Replyz is any different from a normal Q&A feature. Inquiring the ‘view conversations’ tab on Replyz for the most recent questions, looks rather unpromising in terms of actually getting questions answered. The tab reads just like any other Twitter feed where questions quickly disappear as new questions appear, all of them with 0 replies. The service lets you search for questions, but this seems somewhat counterintuitive. Who searches for questions when what one wants is an answer? Those likely to search for the same things that you are interested in are also the most likely to wonder about the same things.

Questions is an attempt to have a say in the market for search online. As a feature, both Facebook Questions and Replyz deal with social search, that is, search that leverages the knowledge base of a social network. The idea is that there are certain types of questions that a normal search engine cannot answer properly because they don’t have a single right answer. Social search is therefore about subjective questions, advice and opinions. Social search and Q&A services have been up on the rise lately with Google purchasing the social search service Aardvark in February 2010, Yahoo Answers, and Quora and Formspring as merely the latest additions. The fact that Facebook calls the beta testing of its feature ‘a help for building the future of Facebook’, attests to the ways in which the Internet is first and foremost about getting questions answered, i.e. about information retrieval. Status updates may provide the main feature of Facebook right now, but it remains to be seen how long other people’s moments can uphold peoples’ interest in the long run.

Facebook and Twitter have some advantages over other Q&A services that keep popping up though. Many people probably trust their Facebook friends more than anonymous people on Google or Formspring. Facebook Questions could have a real potential in terms of asking for opinions and recommendations rather than proving facts. The downside is of course even more information. Asking questions is easy, getting people to answer them much harder. Unless there is a way to heighten peoples’ incentives about answering questions it seems somewhat unlikely that a service like Replyz will actually be useful.

Podcast from SXSW 2010 on social search