On Saturday I attended a one-day event called Seven on Seven at the New Museum of Contemporary Art put on by Rhizome. Seven leading artists were paired with seven leading technologists and programmers to come up with something creative, a new art work, a social media piece etc. over the course of one day. Among these altogether 14 different people were Matt Mullenweg, a creator of WordPress who was paired with Evan Roth, a graffiti artist with a lot of interesting web projects going on, Jeff Hammerbacher, an early Facebook developer who was paired with Aaron Koblin, a data visualization artist who just won an award at this years Transmediale. Others included Tumbler’s David Karp, Delicious founder and Google engineer Joshua Schachter and artist Tauba Auerbach who’s work is exhibited at this years Whitney Biennial and who has even had a solo exhibition at one of my favourite galleries in Oslo, Standard.

I didn’t really know what to expect as there wasn’t much information about the event beforehand but I was pleasantly surprised by what the pairs had come up with during just one day of collaboration and intensive brainstorming. Although pitched as artists and technologists respectively, these lines, especially among these pairs, were increasingly blurred. 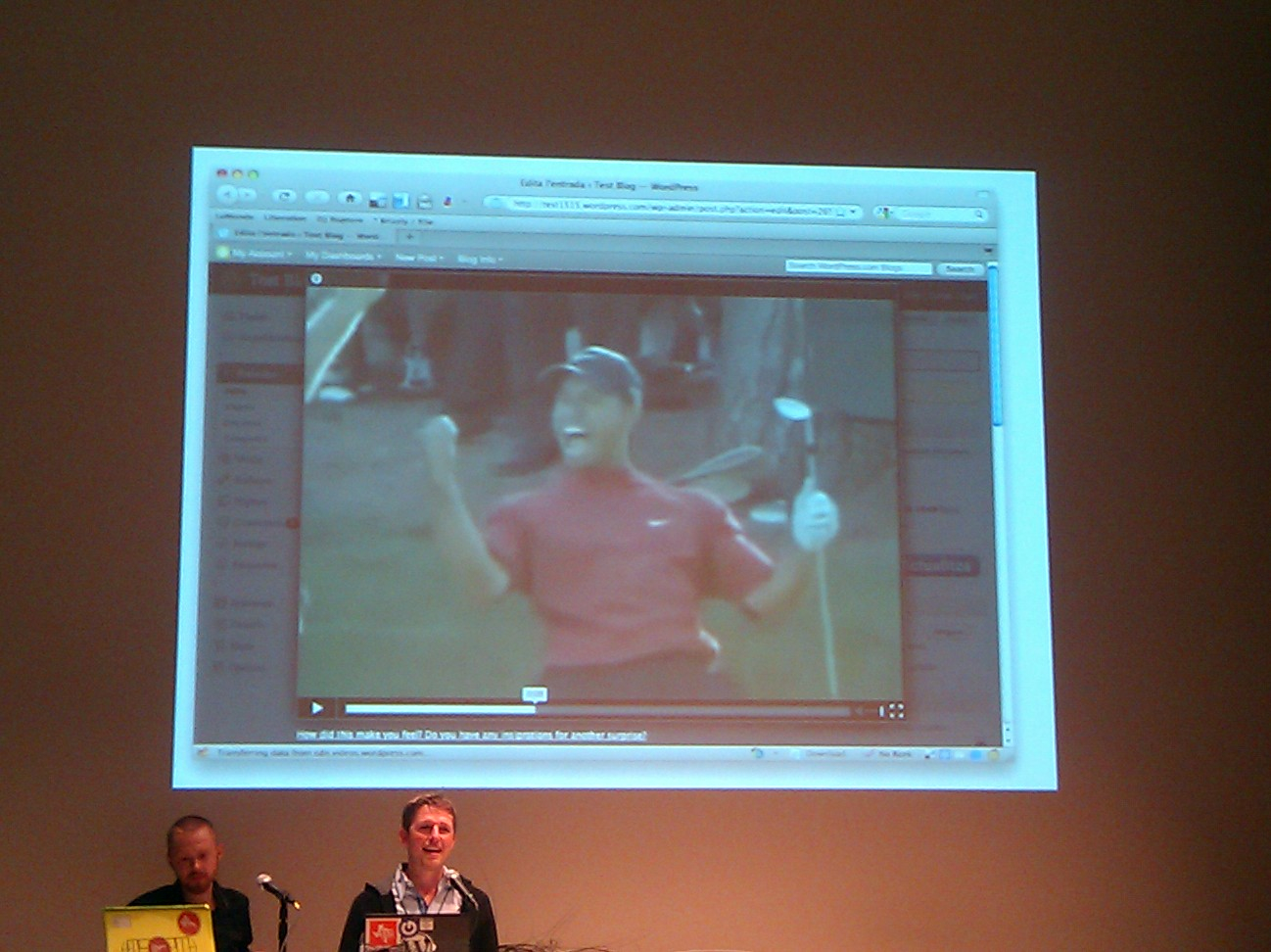 I really enjoyed Mullenweg and Roth’s presentation. Their project naturally revolved around blogging and the fact that blogging most often is regarded as quite a solitary experience. You sit there and write your blog-post and have really no idea who’s going to read it; when you’re finished all you do is to press the ‘publish’ button and that’s it. As Roth proclaimed, it’s like sending the bottle out to sea. So what they proposed was a ‘surprise me’ button that WordPress users can active on their admin system and which will generate random congratulation videos celebrating the bloggers efforts. In addition, playing around with the fact that the stats page are the most loaded page on WordPress, Mullenweg and Roth made a simple mashup using Google search, Wikipedia and Flickr to “humanize” the stats by automatic comparing the number of visitors to a “real life” example of that number, say “your page has been read as many times as there as people living in Cody, Wyoming” with a picture accompanying, adding a sense of community to that solitary blogging experience. 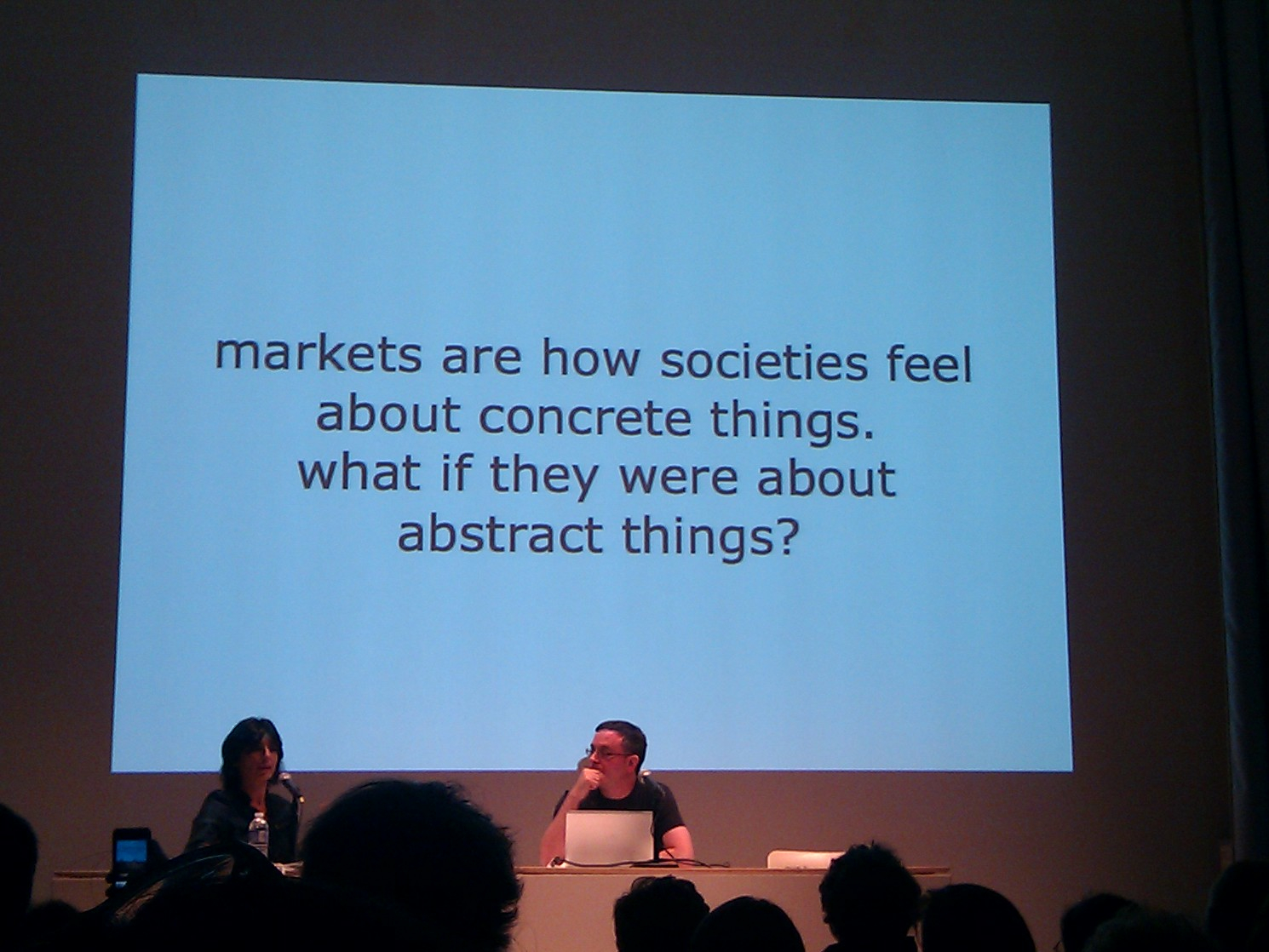 Joshua Schachter and artist Monica Narula came up with the idea of monetizing guilt by harnessing Amazon’s Mechanical Turk to allow users to collectively assign dollar values to various misdeeds that people had considered acts of guilt. The idea was to ask users on Mechanical Turk to name something that made them feel guilty and next to name something that people could do in order to compensate for the act for which one user suggested to give money to charity. The third question that Schachter and Narula therefore crowdsourced was just how many dollars for a number of guilty actions should be given to charitable causes so that guilt might be cleared through donations.  This experiment I think showed in an elegant way how even such abstract concepts as guilt can be monetized in a modern capitalist marketplace on the Internet.